Shooting Sports With A Point and Shoot Camera

Last year, I did a blog post on sports photography tips.  In the post I stated that a DSLR is the best camera for the job.  Even though this remains true, I recently had a conversation with someone about the post and they pointed out to me that many people either don't want a DSLR or can't afford one. This person went on and asked, "How would you shoot a sports event with a point shoot camera?" Great question, I've always shot sports with a DSLR and never really thought about shooting with a point and shoot.  So I pondered the question and came up with some tips.  As luck would have it, a friend got tickets behind home plate for Alex Rodriguez's last game at Yankee Stadium and asked me along. What better place to test out shooting sports with a point shoot?  So with my trusty Canon Powershot SD870 IS, I set off to shoot some photos.  Here is a cropped photo of A-Rod's last hit as NY Yankee that I took with my point and shoot. 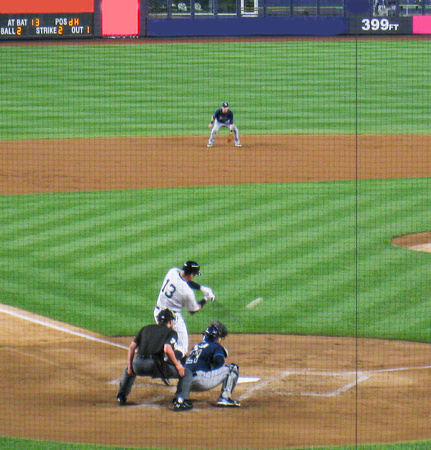 I was very pleased with this shot.  It had the ball in frame, it had context and it was fairly sharp.  So how did I get the shot?  I believe the two most important aspects to shooting with a point and shoot is anticipation and understanding shutter lag. Anticipation, is basically knowing the sport you are shooting and anticipating the action. Shutter lag is a little bit more complicated.  Most point and shoots and camera phones for that matter, use some form of LCD screen. The image you see on the screen is being projected from the sensor in the camera.  So when you press the shutter, the camera must first shut off the screen to switch to capture mode and then shoot the picture.  This results in shutter lag.  Most modern point and shoots have a shutter lag of two seconds or less.  Older cameras, like mine, can have a shutter lag of greater than two seconds. Two seconds doesn't sound like much time but in sports it's an eternity.  To understand how anticipation and shutter lag effects your shot, lets examine how I got the A-Rod shot. First I anticipated the action I wanted to photograph, in this case A-Rod swinging at the ball. I know that a major league pitcher can get a ball to home plate in about two seconds, so accounting for shutter lag I know that I have to press my shutter just as the pitcher is throwing the ball in order to capture A-Rod swinging at the ball.  I also know that if I wait until A-Rod swings to press the shutter, I will miss the shot because of the shutter lag.  So I focused on A-Rod in the box and waited until the pitcher was just about to throw the ball to press the shutter and the rest as they say is history.

So how does this all apply to Mom and Dad photographing their child's sporting event?  First lets stack the odds in your favor. You should start by switching to sports mode.  Every camera has a sports mode.  The sports mode is good because it tells the camera to focus and shoot in the best manner for sports.  Next turn off any kind of digital zoom because it doesn't help.  Make sure your Auto ISO is on.  Lastly turn off you flash because a point shoot flash is to weak to freeze action or be effective from any distance. Now let's go through some examples.  Example one your child is playing goalie on the soccer pitch.  You see the attacker streaking down the pitch to shoot at the net.  In anticipation of the action you want to capture, in this case your child making a spectacular save.  You should focus on your child.  Press the shutter just as the attacker kicks the ball at the net and you should get your shot.  But with one caveat, and that caveat is know the skill level of the children you are photographing.  If this is a pee wee league they don't always have a lot of force behind it and you can get away with waiting  a tick or two after the kick is made and still get the shot.  But if this is high school soccer you need to make sure you are pressing the shutter just as they are kicking the ball at the net.  Bottom line use your own judgement on how fast the ball will travel and then adjust as necessary.  Another example, is your child is a shooting guard on a basketball team.  You see the team setting up a pick and roll for your child. You anticipate where your child is going to come off the screen and point the camera there.  Once your child comes off the screen immediately focus on them as they are waiting for the pass.  Press the shutter immediately after he/she catches the pass to capture them shooting the ball.  The same caveats from the other example apply here as well.

Finally, I would like reiterate a few tips for sports photography whether you shoot with a DSLR or point and shoot.  Don't get tunnel vision.  Which basically means be aware of  the action around you.  For instance in the last example be aware of where the defender so you can anticipate a pump fake to shake the defender before the shot.  Anticipating these sorts of things will help you be ready to get better shots, like a defender sailing by as your child shoots the rock.  Make sure when you frame your shot to keep the ball and/or defender in the frame for context. Sometimes a wider shot which shows the crowd is cool, not everything has to be tight closeups. Don't forgot the quiet moments. Take pictures of your child on the bench laughing with their friends, talking with their coach, warming up, or shaking hands at the end of the game.  Last and most important have fun.