Happy New Year again!!  No it's not a time warp, it is the Asian Lunar New Year.  This year on February 16th we celebrate the year of the dog.  People born under this sign are said to be loyal, honest, and trustworthy.  They are good judges of character who are quick to anger and just as quick to forgive.  They make excellent leaders and always put family first.  They are most compatible with people born under the Horse, Tiger, or Rabbit sign. Quick Chinese New Year fact, during the New Year celebration it is tradition to give out red envelopes. Each red envelope is supposed to contain crisp brand new bills only.  It is considered bad luck and poor taste to put old money or coins in the envelope.  It is also bad luck to put in denominations of four(e.g. don't put four dollars in the envelope) and the amount should be a round even number.  Traditionally red envelopes are handed out by the married adults to all of the single children (this includes unmarried adults).  Adults also can give red envelopes to their elders, especially their parents.  If you receive a red envelope always take it with two hands, thank the giver and never open the envelope in front of them.  The red envelope symbolizes wealth, prosperity, and good fortune for the new year.

Of course, Chinese New Year isn't the only holiday in February.  It is time to celebrate love on Valentine's Day.  So don't forgot to order your roses and chocolates and keep an eye out for our upcoming Valentine's Day promotion.

In honor of the New Year, this month's travel post is about my trip to China.   Specifically my time in the city of Xi'an.  Xi'an is in North Western China and is the Capital of the Shaanxi province.  It was also the seat of power for Emperor Qin the first emperor of China and was the Capital of 13 different Chinese Dynasties.  Of course Xi'an is most famous for Emperor Qin's Terracotta Army but the city itself is a wonderful blend of old and new.  It's modern cosmopolitan city center sits side by side with ancient Chinese landmarks.  You can go rent bikes and ride along the ancient city wall and then pop into Starbucks for a drink after you're done. 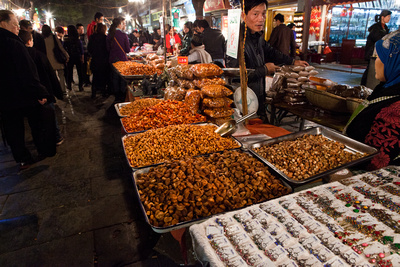 But my favorite thing was visiting the Muslim Market at night(Western China has a large Muslim population).  The market is a Chinese street fair, that only comes to life at night.  They close down the street and the vendors and store owners on the street, set up tables and booths all along the street and sell a wide assortment of goods.  What made it so much fun was this isn't something tourist generally visit, so it was an unfiltered look at the people of China and how they live. My wonderful guide Frank took us here after I asked him to take us out at night to shoot some photos.  Thank you to Frank for taking such good care of us, even though he didn't quite understand why the crazy American photographer wanted to take pictures at night. I love taking photos at night.  With all the buildings lit up, the mood and vibe of the city just seems more magical to me.  It was no different in Xi'an.  The city is beautiful at night.  Especially the ancient Bell Tower.  I had seen the Bell Tower lit up the night before going to dinner and couldn't wait to go get a photo.  Interesting fact about Xi'an, the traffic in the city center is so bad that they created underground pedestrian tunnels for people to cross the street.  One of these tunnel entrances is across the street from the Bell Tower and around the tunnel entrance is a cutout that leads up to the street and that is where I decided to set up my tripod.   When I shoot at night I like to keep the camera in aperture priority mode at f/16 at ISO 100 and I let the reflective meter in the camera read the light in the scene.  In this case it was a ten second exposure.  Needless to say with such a long exposure a good tripod and a remote shutter release are a must.  I set my white balance to 3200 Kelvin because most cities still use tungsten bulbs at night.  Though this slowly changing and I'm seeing more LED lights in the cities I visit.  One of the neat things with a ten second exposure is all the traffic that was going by left wonderful streaks of light in my shot.  The end result was one of my very photos from the trip.  All in all a very worthwhile evening out.

My second favorite thing I saw in Xi'an was the Terracotta Warriors.  The neat thing about visiting the Terracotta Warrior site is that the Chinese government just built a hanger over the dig site where the statues were found.  There's even a sign showing where the farmer first found the statues.  So when you visit you're at an actual dig site and you see archaeologist working on the site repairing and cataloging their finds.  Each site is called a pit and there are three pits all together and a museum.  This is probably one of China's most famous attractions, not only for tourists but for the locals as well.  So needless to say it was super crowded and we were packed in like sardines. 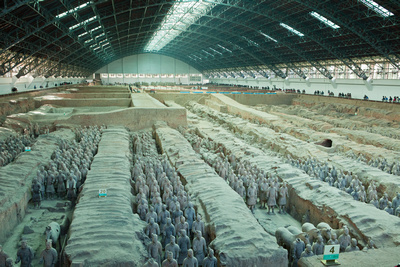 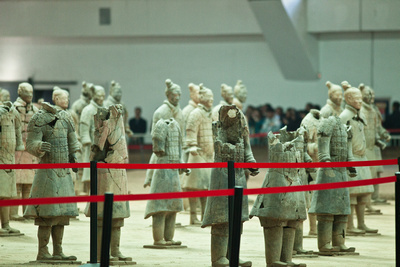 As you can see in the picture, the dig site is pretty big and well lit but flash is not allowed and there were lots of soldiers there to enforce this rule.  So for my photo "Stone Sentry",  I used my trusty 300 f/4 IS lens to shoot close ups of the Terracotta Warriors.  I love this lens, because unlike other long lenses it is very light and easy to hand hold.  In general most f/4 lenses are lighter and easier to hand hold as compared to their heavier f/2.8 brethren.  Being able to hand hold a long lens is very important because a lot of places I go don't allow tripods or there isn't enough time or space to set one up.  I used ISO 3200 and shot at 1/250th of second at f/4.  Now this does break the rule that your shutter speed should equal your focal length for sharp pictures.  But my lens has Image Stabilization built in, so I pushed the envelope and it worked out pretty well. Our recipe of the month comes from Ken Hom.  My Grandma loved using recipes from his book, "Easy Family Recipes from a Chinese-American Childhood" and passed this book down to me.  I don't think it is in publication anymore but you may find it online somewhere.  Traditional Pepper Beef is one of our family favorites.  But for reasons unknown to me, Grandma always called this dish Pepper Steak.  Plus she made a few alterations.  One she added tomatoes.  Usually she quartered four tomatoes and added them to dish last mixing them into the sauce.  Then she would lower the flame and let the tomatoes simmer in the sauce for about 15 to 20 minutes.  The end result is amazing stewed tomatoes.  Whether you choose add the tomatoes is up to you.  But I've found even people who don't like tomatoes love to eat them when added to this dish.  Second she used baking powder in the marinade instead of baking soda.  I'm not sure what the difference is but Grandma used baking powder, so I use baking powder.  Third Ken likes his peppers and used three which is overkill(unless you really like peppers), one pepper is just fine.  Lastly is a couple alterations I made.  One the recipe calls for 1 pound of flank steak.  I love meat so I usually double the amount to 2 pounds and then I triple the amount of marinade.  So instead of 2 teaspoons of light soy sauce, I use 6 teaspoons (or 2 tablespoons).  Basically I just multiply everything by three.  Finally, a note for anyone who has never cooked Chinese stir-fry before.  The flame is very high when you cook this way, just two notches or so below its highest setting.  So you will see some smoke coming from the pan when heating the oil and hear very loud sizzling when you throw the food in.  This is normal and should calm down once the food is in the pan or wok.  Also the oil does tend to spit if your not careful.  For example never put garlic from a jar into the hot oil or you will have hot minced garlic flying around you kitchen.  Put the onion first then the garlic second.  But stir-frying food this way is worth it because you don't over cook the meat and combined with marinade your flank steak should be soft and tender.  Finally a thought about the leftovers.  If you happen to have leftovers reheat them in a wok (or a pan will do) and add three tablespoons of Madras Curry Powder (I use the Natco Curry powder from World Market).  Once the sauce is warm serve over spaghetti noodles.  Viola instant second meal.

Cut steak in half, then cut thin slices, 2 inches wide, cutting against the grain.  Mix the beef with the soy sauce, rice wine, sesame oil, baking powder, and cornstarch.  Let it sit for 20 minutes.

Next combine the ingredients for the sauce, put the chicken stock, rice wine, soy sauce, sugar, salt, and pepper in a bowl and stir well then set aside.

Slice your pepper, onion and if adding quarter your tomatoes.

Heat a wok or deep pan unit it is very hot.  Swirl in the 3 tablespoons of peanut oil(or Extra Virgin Olive Oil) and when it is very hot and smoking, add the beef and stir-fry for 3 minutes.

Remove the beef with a slotted spoon and drain off all but 1 tablespoon of oil.

Put in the quartered tomatoes and mix well with the sauce.  Lower the fire to a simmer and cover the wok or pan and let the dish simmer for 15-20 minutes stirring once or twice.